There is no such thing as a good gun 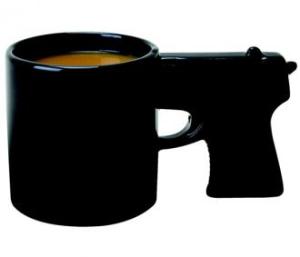 And in fairness to Charlton Heston, to finish the quote “… there is no such thing as a bad gun.   A gun in the hands of a bad man is a very dangerous thing.   A gun in the hands of a good person is no danger to anyone except the bad guys. …”  I think I’m pretty liberal in my thinking, but there a few things I object strongly to.  One is the sexploitation of girls (and boys).  Another is the American fixation on guns (sorry Charlton)

I saw this coffee mug recently on Uncovet (hate the way you have to register to get to the site).  At first glance I thought this mug was cool, I love the unexpected juxtaposition of different objects.  But now I’m not so sure.  Ignoring the hyperbole about if it is people or guns or bullets that kill people, I do object to the normalisation of guns in our culture.  A don’t have a problem with guns per se, but I don’t agree that they are an everyday item.
Another more famous example of this juxtapostion (not the cigarette lighter or shoes) is Venucci’s gun vase (see  below).

It’s compllicated though isn’t it – if this had been displayed as an art piece, created to make a point (though I’m not sure what the point is) I would have applauded it and steadfastly defended the artists right. I thought the Virgin Mary in a condom was a very clever religious/political statement.  But does context make a difference?   A statue of Virgin Mary covered with a condom behind a glass box (though I think that was for security) is different to something mass produced and sitting in a shop (virtual or otherwise).   Perhaps this is why this mug offends me – because it isn’t going to offend anyone else 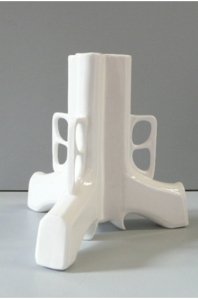